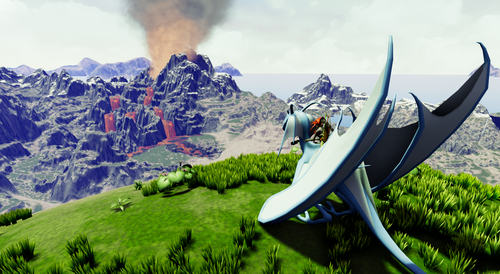 Update 19 is coming a little sooner than expected with a major version upgrade to the UE4 engine. Windstone will now be using a more recent and stable version of the UE4 Engine, Version 4.19.  Version 4.20 and 4.21 have major known issues that conflict with Windstone but transitions to newer versions will happen periodically once these are fixed.  Because of the many changes that needed to happen to bring Windstone to 4.19 (all the way from 4.11)  it needs extensive testing before it is safe to continue with development.  Although the underlying changes are massive, add much more functionality, improve performance and increase visual quality, this update will not have many changes immediately apparent to the player. There are some changes including the addition of the female character while mounted on a dragon as well as visible weapons and armour on the dragon rider that change depending on what you have equipped. A handful of other bug fixes and minor changes have also been made which will be listed in the patch notes. I hope to push Update 19 before the end of the weekend.

Survive in a land ravaged by an invasive species. You and your dragon are Windstone's last hope.